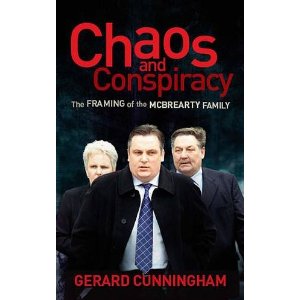 Gerard Cunningham is the author of  'Chaos & Conspiracy', the story of the McBrearty family and the Morris tribunal.

“Chaos and Conspiracy is a gripping account which will be read most avidly in Raphoe. But it should also be obligatory reading for the 14,000 members of the gardai and for those of us tempted to argue that the end justifies the means when it comes to combating crime.”
Michael Brennan, Irish Independent

“This is a brilliant piece of reporting. Readers will already know the bones of this case through newspaper, TV and radio reports. The book to hand, taken in two or three sittings, makes for a more dramatic read than the daily drip-feed of national newspapers.”
Tom Widger, Sunday Tribune

“[The scandal is] the country’s Guantanamo Bay — a pockmark on the state’s policing practice. Dozens of gardaí were criticised in the tribunal’s reports, most of who retired in shame.”
Richard Fitzpatrick, Irish Examiner